Iqbal Masih was full of promise and courage. He stood for the rights of the children in Pakistan. Even at a young age, he spearheaded a campaign against child labour in Pakistan. He achieved much more in his short life than most would in a lifetime.

Mr. Ehsan Ullah Khan, who headed the BLLF, accused the carpet industry in Pakistan for orchestrating Iqbal Masih's murder. He told Kathy Gannon of the Associated Press that the 12-year old Iqbal was murdered by the 'carpet mafia' for campaigning against child labour. Kathy's story from AP was carried by hundreds of newspapers across the world. However, her subsequent story that corrected the false allegation was ignored by most newspapers.

A detailed investigation by the fiercely independent and globally respected, Human Rights Commission of Pakistan (HRCP) concluded the following:
A copy of the HRCP's report is available HERE.

The campaign against child labour in Pakistan reached Canada where the media and others accused the carpet industry in Pakistan for murdering Iqbal Masih. Despite reports by the Associated Press and Reuters that Iqbal's murder was not orchestrated by the carpet industry in Pakistan, consumers and retailers were pushed to boycott textile products from Pakistan. The campaign against Pakistani exports cost a $37 million decline in textile exports to Canada in 1996, while the exports to the United States continued to increase during the same period. The drop could be attributed to the bad press generated in Canada against Pakistan in 1995 and 1996 based on the false account of Iqbal Masih's death. 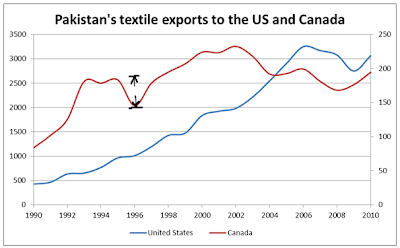 Canadian news media  led the count in the 416 news stories reported between 1995 and 2010 in which Pakistan's carpet industry was falsely accused of orchestrating Iqbal Masih's murder. The Toronto Star with 30 stories, The Hamilton Spectator with 17 stories, CBCA with 10 stories, and The Globe and Mail with 9 stories are examples of the frequency of stories that accused the carpet industry in Pakistan.

Soon after Iqbal's murder, Kathy Gannon of AP, Tahir Ikram of Reuters, and other journalists from the foreign press corps in Islamabad visited Iqbal's family in Muridke. Tahir was the only journalist in the team who spoke Punjabi and hence he translated the interviews for the rest of the team. Following is his account of what caused Iqbal Masih's tragic death.

Reuters story filed on April 20, 1995, but ignored by the global media.

MURIDKE, Pakistan, April 20 (Reuter) - Pakistani police said on Thursday the killing of a 12-year-old Christian campaigner against child labour did not seem to be a plot.

The police view of Iqbal Masih's killing, which has provoked an outcry both at home and abroad, contrasted with that of a labour reform group of which the boy was a member.

All reports point to a plain murder by an individual, said police inspector Muhammad Ashraf of Ferozwala police station, in whose jurisdiction Masih was shot dead on Sunday.

"Iqbal Masih did not have enemies -- he did not become a target of the carpet mafia," Ashraf said, referring to a widespread belief the boy was the victim of carpet-industry owners known for employing child labour.

Masih worked as a carpet weaver from the age of four, after being sold by his parents to a factory, until he was 10 -- much of the time shackled to a loom, according to an account he gave to an international labour conference in Sweden last November.

The incident's first information report (FIR) recorded by police says Masih was shot by a man whom the boy and two relatives had seen having sex with a donkey.

"The FIR is factually correct and that does not suggest it was a case of a planned murder," Ashraf told Reuters.

The FIR, filed by Masih's relations Liaqat Masih and Faryab Masih, said they had seen the man engaged in an act of bestiality and admonished him. The man fired at them and then ran away. Iqbal Mashi's mother Inayat Bibi, a domestic worker, said she did not believe any carpet manufacturer was behind the murder.

"I don't know who killed my son and why but I cannot blame carpet manufacturers," she told Reuters at her small home at Muridke village, about 30 km (18 miles) west of the Punjab province capital of Lahore.

But Ehasnullah Khan, president of the Bonded Labour Liberation Front of Pakistan (BLLFP), said the boy had been a target of feudal landlords and carpet-industry owners and had received death threats.

"Iqbal was not killed in his area and he did not have enmity with anybody except for his fight against the bonded child labour," he said. "Iqbal had repeatedly said he had received threats."

Prime Minister Benazir Bhutto has ordered payment of compensation to Masih's family and has called the killing an outrage.

In Geneva, members of a U.N. Working Group on Contemporary Forms of Slavery hailed the boy as a symbol of the fate awaiting many human-rights fighters around the world.

The Globe and Mail in Canada indeed reported on the controversy surrounding Iqbal's death on November 20, 1996.

When young Canadian Craig Kielburger launched his crusade against child labour last year, he said his inspiration was the killing of a Pakistani child worker named Iqbal Masih.

But Mr. Masih turned out to be an adult, and his death had nothing to do with child labour.

While alive, Mr. Masih became a celebrity in the fight against child labour. The short, soft-spoken carpet weaver, who was supposed to be 12 years old, was flown to Europe and the United States to explain to audiences how he had been exploited by the carpet industry. He even won a $10,000 U.S. Youth in Action award.

Naturally, when Mr. Masih, a Christian, was shot to death in his Punjab village in April of 1995, there was an international uproar. Pakistan's Bonded Labour Liberation Front claimed the carpet industry had assassinated the boy, and it demanded government action.

A judicial inquiry, however, came up with some very different findings, as did investigations by the independent Human Rights Commission of Pakistan and several Pakistani journalists. They concluded Mr. Masih was shot by a fellow villager whom he had caught in a compromising sexual act.

The investigations also uncovered a baptismal certificate showing Mr. Masih's true age at death to be 19, not 12, and evidence of a birth disorder that stunted his growth.

Although the carpet industry claims it lost $10-million (U.S.) in orders because of the initial uproar over the death, the case has become valuable fodder for Pakistan's government and private industry.

They say child labour is far less rampant than human-rights groups claim, and they now have more evidence to prove their point. The International Labour Organization, which this year conducted the most extensive survey yet of child labour in Pakistan, estimated that only 3.3 million Pakistani children under the age of 14 are full-time workers.

The Human Rights Commission, however, stands by its estimate of 14 million child labourers -- one in five children.

"The fact is what we see all around us," commission director Aziz Siddiqui said. "The entire informal sector, the entire agriculture sector is full of child labourers."

Murtaza Haider
Toronto, Ontario, Canada
I am an associate professor at the Ted Rogers School of Management at Ryerson University. I am the author of Getting Started With data Science: Making Sense of Data with Analytics. My academic interests are analytics, housing and transport markets in urban contexts. My other interests are South Asian culture, politics, and economics.